Untreated opioid use disorder during pregnancy can have devastating consequences for the unborn baby.

Fluctuating levels of opioids in the mother may expose the fetus to repeated periods of withdrawal, which can harm placenta function.

Other direct physical risks include:

Other indirect risks to the fetus include:

What is Neonatal Abstinence Syndrome? 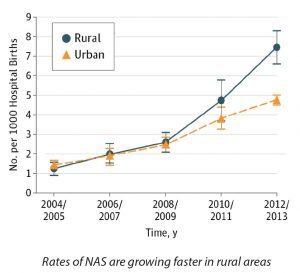 Neonatal abstinence syndrome (NAS) occurs when an infant becomes dependent on opioids or other drugs used by the mother during pregnancy. The infant experiences withdrawal symptoms that can include (but are not limited to) tremors, diarrhea, fever, irritability, seizures, and difficulty feeding.

Buprenorphine and methadone have both been shown to be safe and effective treatments for opioid use disorder during pregnancy. While NAS may still occur in babies whose mothers received these medications, it is less severe than in the absence of treatment. Research does not support reducing medication dose to prevent NAS, as it may lead to increased illicit drug use, resulting in greater risk to the fetus.

A recent meta-analysis showed that methadone is associated with higher treatment retention. However, buprenorphine resulted in:

Patients should work with their doctor to determine which medication is best for them.

Although breastfeeding is typically low among mothers with opioid use disorder, studies have found that breastfeeding can reduce length of hospital stay and need for morphine treatment in infants. Unless there are specific medical concerns (e.g., maternal HIV infection), encouraging mothers to breastfeed and swaddle newborns may ease infant NAS symptoms and improve bonding.

Methadone and Buprenorphine Can Effectively Treat Opioid Use Disorder During Pregnancy

Methadone has been used to treat pregnant women with opioid use disorder since the 1970s and was recognized as the standard of care by 1998. Since then, studies have shown that buprenorphine is also an effective treatment option. The American College of Obstetricians and Gynecologists and the American Society of Addiction Medicine support methadone and buprenorphine treatment as best practice for opioid use disorder during pregnancy.

Benefits of Treatment During Pregnancy. Treatment with methadone or buprenorphine improves infant outcomes by:

Compared to untreated pregnant women, women treated with methadone or buprenorphine had infants with:

NIDA-funded studies are evaluating key barriers and facilitators to prescribing methadone and buprenorphine for pregnant women. Current projects include:

Supporting access to treatment. Health insurance providers that cover treatment for substance use disorders are required to provide coverage equivalent to what is provided for other health conditions.